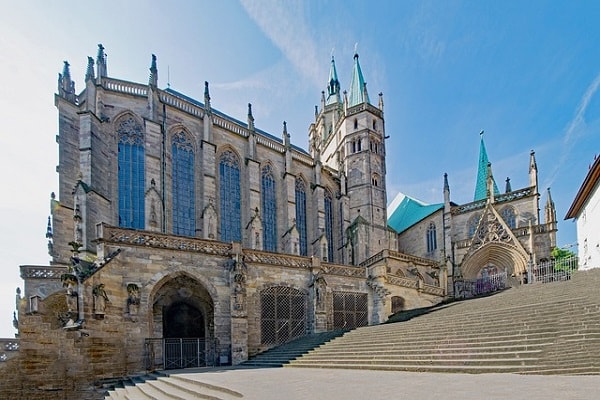 Closely connected to the city and its history, medieval architects have created two churches on the Domberg, which give an eloquent testimony of Gothic church architecture far beyond the borders of Thuringia. With the wide cathedral steps the intimate connection of the churches with the life and bustle of the city becomes clear. The predecessors of both churches were founded at the time of the early Christian mission in the area of ​​the important trading center "erphesfurt". After the early medieval bishopric founding in 742, the church of the first Bishop of Thuringia was built on the site of today's cathedral. The importance of this church was preserved, even if the bishopric was abandoned soon. At the site of the first episcopal church was created by extensive construction activity in Romanesque and Gothic times, the collegiate church of St. Mary, since 1994 Episcopal Church of the newly founded Diocese of Erfurt.